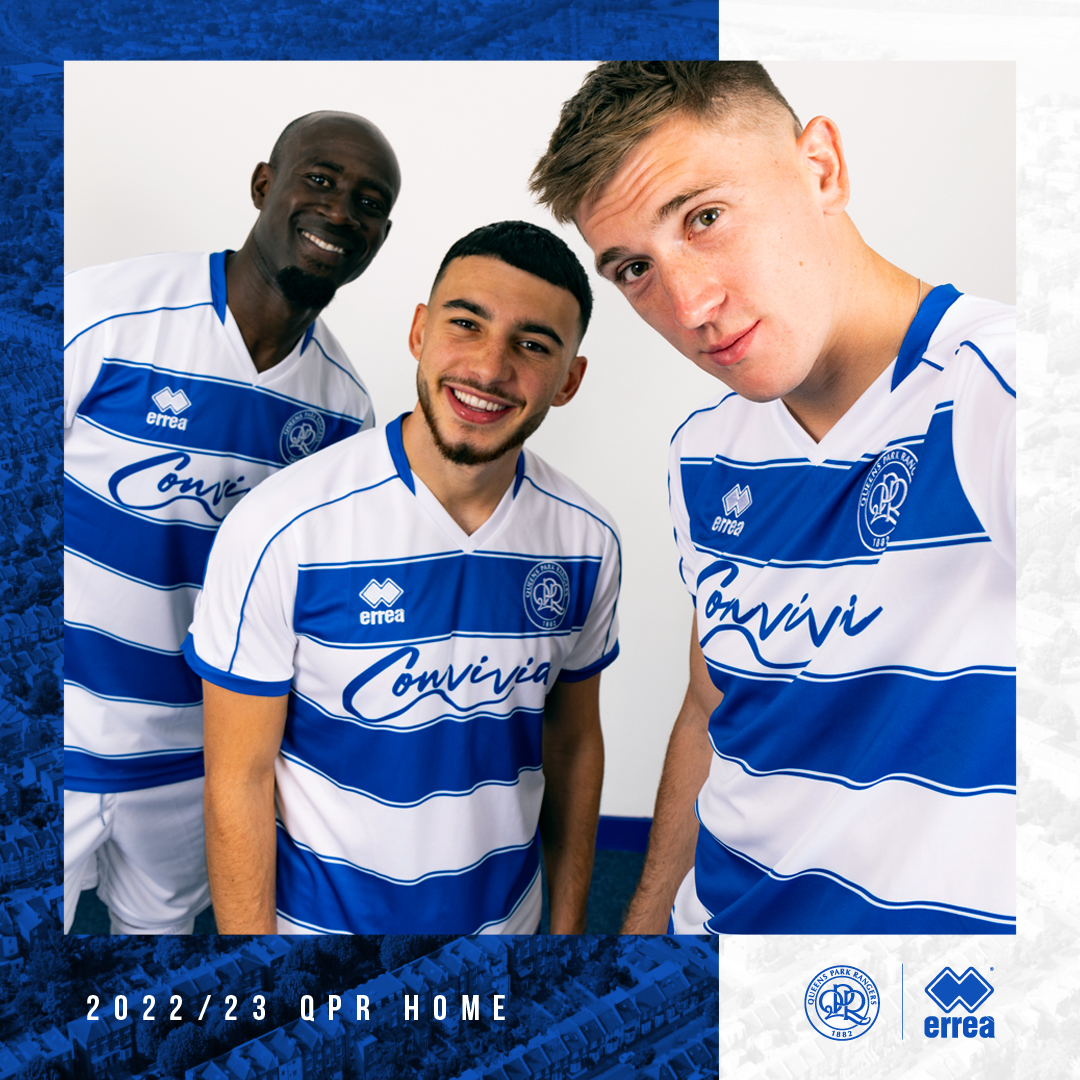 Queen’s Park Rangers [QPR] Football Club has unveiled its new kits for the 2022/23 season, following a dedicated launch event held in partnership with its new front of shirt sponsor, Convivia.

In addition, thousands of fans took to social media to watch the reveal by livestream.

Not only local to QPR’s Loftus Road Stadium, the memorial school was also attended by Roy Ledgister, CEO of Convivia and lifelong QPR supporter, who grew up in the local Shepherds Bush area.

The new QPR home kit comprises of a classic hooped, pure blue and white shirt with some additional touches – including the front of shirt sponsor Convivia logo transformed from gold into white.

The away kit design reflects the home, but in a striking new colour combination of navy, claret, and gold, with the additional touch of gold names and numbers, sure to become an instant fan favourite.

The home and away shirts have been made using Errea’s state-of-the-art T-Energy fabric, which has antiviral and antibacterial properties along with Minusnine J1+ treatment which repels liquids and droplets. As Errea doesn’t use petrochemical dyes in the sublimation process, the shirts are not only better for the health and wellbeing of the wearer, but also for the environment.

As a result, the T-Energy shirts offer the perfect combination of maximum performance and increased safety for all players and fans of QPR.

Fabrizio Taddei, Head of Pro Clubs Development for Errea confirmed: “We are delighted to be launching another fantastic set of kits, ready for the 2022/23 season. As ever we have worked very closely with the club to design and produce kits that we and they are very proud of. I would like to wish all the Hoops Staff, Players, and Fans the very best of luck for next season.”

Euan Inglis, Commercial Director of QPR added: We are delighted with this season’s kits, the home shirt is a modern take on the classic QPR home shirt with a thin tramline, which runs parallel to the traditional hoops. The letter and numbers will also return to red this season. The away shirt is a hooped design in navy and berry colours, with a striking gold piping and gold tramlines that run parallel to the hoops.”

Discussing the launch of the first QPR kit with Convivia as front of shirt sponsor, Roy Ledgister, CEO of Convivia added: “Seeing the Convivia brand front and centre of the new QPR 2022/23 season kits is a genuine dream come true and one the team and I are immensely proud of – particularly as the new kits look fantastic!

For us, sponsoring QPR is more than just a commercial partnership, it’s an opportunity to integrate with and support the wider local community – starting with the incredible fanbase. We are delighted with the positive response we have received to date and now look forward to being part of the club for this next three-year term.”

The 2022/23 replica kits will be available to purchase from the Stadium Superstore and online from 23rd July 2022.

Announced as sole principal partner of QPR in June 2022, Convivia has a clear vision to establish the gold standard of luxury, affordable homes through a unique procurement model and proven design methodology.

Already working closely with Local Authorities and established Housing Associations across the country, the brand is committed to ensuring its Homes become synonymous with positive change.